Tokyo Olympic Games president Yoshiro Mori followed the standard procedure for a Japanese politician after making sexist remarks: retract the comments, apologise — less for their content than for any inconvenience caused — and attack the media for making a fuss.

In Japan, which is ranked 121st in the world on gender equality by the World Economic Forum, that is usually enough. Mori, an 83-year-old former prime minister, and contemporaries such as deputy prime minister Taro Aso have a long history of similar comments. But such gaffes have not harmed their political careers.

This time, however, the public criticism reached the point where Mori had to resign last week as head of Tokyo 2020. The question is whether this marks a change on gender equality in Japan or if the high profile of the Olympics — which made Mori answerable to pressure from corporate sponsors and international opinion — means it is an exceptional case.

Mori made the comments at a Japan Olympic Committee meeting this month to discuss increasing female representation. Meetings take “twice as long”, he said, when there were women participating. “If one raises her hand to speak then all the others feel they have to do the same. So it ends up with everybody talking,” he added.

The resignation is the latest mishap to hit the postponed Tokyo games, which had already been postponed for a year because of the coronavirus pandemic. Mori’s departure leaves the event leaderless with just months to go until the opening ceremony.


Proportion of Japanese who thought Mori should quit

Mari Miura, professor of political science at Sophia University, said Mori’s resignation was a “watershed event” for gender equality. She is one of the organisers of an annual online vote for the most sexist public remark of the year — and there are always plenty of contenders.

“The process of [Mori’s] resignation was very important,” she said. “Many people in Japan voiced their disagreement, saying that his remarks were sexist and that he had to take responsibility for them. That’s quite unusual.”

Polls showed that about 60 per cent of the public thought Mori should quit, with the backlash spreading beyond the usual circle of activists and opposition politicians. “This time women were very quick to express their opinions online — especially the younger generation,” said Yayo Okano, a professor at Doshisha University in Kyoto.

But Mori only stepped down after a series of Olympic sponsors made public statements disowning his remarks and the female governor of Tokyo refused to meet him, suggesting he would be unable to function in the job.

The online campaign fed on criticism from abroad, which was avidly reported by the Japanese media. “Don’t be silent,” tweeted the EU embassy in Tokyo.

“Definitely going to corner this guy at the breakfast buffet,” said Hayley Wickenheiser, a four-time gold medallist in ice hockey and Canadian member of the International Olympic Committee.

A sense that the world was watching put pressure on sponsors, which were initially reluctant to get involved. When the Financial Times started calling companies on February 5, only the investment bank Nomura made an on-the-record statement, while another company provided a comment and then retracted it.

As the furore grew, corporate Japan realised it had to speak out, especially after Mori gave a press conference in which he apologised but appeared more irritated than remorseful.

“By principle, we don’t normally comment on remarks made by individuals, especially on a political matter,” said an official at one sponsor. “But Mr Mori’s news conference the next day turned the situation from a gaffe into a serious matter. If we remained silent, we felt we would be seen as condoning it.”

Without foreign pressure, added the sponsor, Mori would probably have survived. 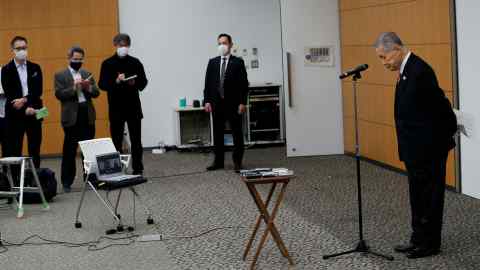 Some commentators, however, saw the criticism of Mori as an example of US-style “wokism” or “cancel culture” coming to Japan, even though the context of his remarks — in a discussion on increasing female participation at the JOC — suggested they were his real opinion rather than a verbal mis-step.

“I feel that’s what some people really think in Japan,” said Hiroaki Nakanishi, chair of the business federation Keidanren, adding that such thinking was outdated but the resulting social media storm was “terrifying”.

Another question is whether the affair will bring about a real change in attitudes or if it just represents the last gasp for a generation of elderly politicians unaware of what it is acceptable to say in public. Mori himself sought to deflect attacks by implying that his opponents were guilty of age discrimination, and wanted to treat older people as “oversize garbage”.

But Miura said the point was to increase the female voice in decisions and Mori’s downfall had shown that opposing that was no longer socially acceptable.

“He basically wanted women to shut up and disagreed with the idea of a quota or a target,” she said. “Any organisation that needs public approval will have to seek diversity and give women enough time and space.”

Staying private: the booming market for shares in the hottest start-ups

The scourge of work email is far worse than you think

Myanmar police crack down on protests for second day; one dead, several hurt