Thomas Piketty is associated with mind-numbing data analysis. Yet in normal times the best-selling French economist is also a cinema lover, often going twice a week. “It’s one of the good things of being in Paris. You just walk and there are movie theatres everywhere,” the 49-year old says. His Capital in the Twenty-First Century was once cruelly labelled the most unread bestseller of all time — on the basis that ebook readers tended to highlight only passages towards the beginning of the text.

Yet those who have read it will know it is laced with literary references, from Jane Austen to Honoré de Balzac.

And so the idea of transforming Piketty’s 577-page economic opus into a 100-minute documentary is less outlandish than it might seem. Here is the story of the accumulation of capital throughout the centuries, with the graphs replaced by clips from Les Misérables, Wall Street and Family Guy.

It certainly gives those who never finished the book an easy way out. And it fits with Piketty’s change in direction: his latest book, Capital and Ideology, explores the ideas used to justify the unequal distribution of wealth.

The actual director, the New Zealander Justin Pemberton, spent two years watching archive footage on his ferry commute, with some delightful results. Margaret Thatcher, who embodies the social mobility of the postwar golden age, is seen saying: “I don’t think there will be a woman prime minister in my lifetime.” (Ironically, the use of Hollywood archive meant that a film criticising the returns on property ended up paying large sums to intellectual property owners.) 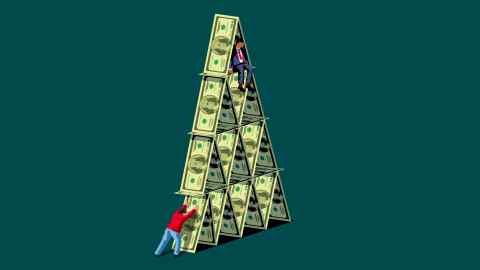 Piketty was adamant that the film should focus on the past as much as the present — it starts in the 17th century, and reaches the halfway point around 1980. He also did not want the documentary to revolve around him. So we hear from Financial Times columnist Gillian Tett, who argues that the way that the elite stays in power is partly “by shaping the way that we think”, and Francis Fukuyama, the conservative political scientist, who agrees with Piketty that the existence of the Soviet Union scared western governments into addressing wealth inequality.

Perhaps the most startling scenes feature Berkeley psychologist Paul Piff, who shows how unearned wealth affects people’s behaviour. In an experiment, Monopoly players who are given twice as much money — plus an extra die — become boastful and less compassionate. They do not attribute their success to luck. “You see people who are winning because of the flip of a coin start to act as if they actually deserve to win,” Piff tells viewers. The read-across to today’s society, where inequalities are often justified as a result of merit, is obvious.

The timing of the film is double-edged. On one hand, the pandemic seems the type of event that has historically caused radical change in inequality — the world wars led European countries to tax the rich — and already the coronavirus response has included unprecedented state intervention. Piketty, however, insists that “catastrophes are neither necessary nor sufficient” for radical change.

On the other hand, the liveliest political debates seem to surround identity politics. A wealth tax is less in vogue than tackling migration or discrimination. Piketty links the emergence of rightwing identity politics to the closing down of economic debate since the 1980s. “If you tell people that there’s no alternative economic policy — that there’s nothing the government can change about economic inequality, that governments don’t control anything except borders and their identity — we should not be surprised that 20 years down the road the entire political discussion is about border control and control of identity,” he says.

He sees the Black Lives Matter movement as different — about the failure to discuss righting historical injustices. Nonetheless, “if we want to get away from identity politics, we really have to reopen the discussion about different possible economic systems. Otherwise we’ll be stuck in this identity fight more and more.”

Absent from Capital in the Twenty-First Century, the documentary, is the usual political terminology. “Left and right can mean very, very different things in different historical contexts,” says Piketty. “Certainly I don’t want people to think in these terms.”

The film also features no politicians, despite the fact that some of Piketty’s ideas have been embraced by prominent figures on the left. “I remember back in 2014, when Capital in the Twenty-First Century came out, I had a public meeting with Elizabeth Warren in Boston and at the time she was very sceptical about a wealth tax,” says Piketty.

Warren, and fellow left-winger Bernie Sanders, ran for the Democratic presidential nomination on the basis of a wealth tax. Yet they lost out to moderate Joe Biden.

Piketty was disappointed by French president François Hollande but never had high hopes in Emmanuel Macron, whose agenda in dismantling the wealth tax was, he says, “clear from the beginning”. He sees Macron as an alliance of the high-education and high-wealth voters from the centre-left and centre-right. “In the long run, if you only convince the people at the top, you are very weak.”

So Piketty’s ideas, for all their influence, have not so far translated into actual policy. “Nobody expects one book or one newspaper or one politician to change everything in the course of history,” he shrugs. “I never expected that — I’m not so crazy.”

Nonetheless, he feels “an even greater sense of responsibility” since the success of his first book. He says Capital and Ideology, the follow-up, is “better”, partly because it includes evidence from more parts of the world, including former colonies. For years, the left lacked ideas. Does it now have the ideas, but lack the leaders to sell them to the public? “They still don’t have the ideas!” says Piketty, seated in front of a shelf featuring his own books. “And I don’t claim I have the ideas. I’m trying to contribute to the discussion.”

He blames the stagnation in educational spending (as a proportion of national income) for the slowdown in growth in developed countries, and argues that the eurozone must make more decisions by majority voting, to allow progress towards common tax and budget policy. But globalisation and technology mean there can be no simple return to the equalising policies of the past.

“That’s the general point I’m trying to make in my work: we are trying to solve new intellectual and political challenges. It’s not just that a few bad people prevent us from doing what we should do. Most of the time we don’t know what we should do.”

WHAT TO EXPECT AT TESLA’S UPCOMING BATTERY DAY

Is Roku the Future of TV Ad Monetization? Analyst Weighs In

BJP should give account of 15 years of rule in MP: Kamal Nath