On a bramble and bracken-covered hill above St Austell in Cornwall, Jeremy Wrathall walks towards a shallow pit that still bears the marks of human activity from over half a century earlier. He picks up a 20cm wide rock from the ground, pointing out the small flakes of lithium-rich mica that glint in the midday sun.

“We don’t know how deep it was, how much they took out,” says Mr Wrathall, a former investment banker who quit his job to hunt for lithium in the south-western region of England. “The collective memory is gone. It’s like geological detective work.”

Mr Wrathall was tipped off about the UK’s only known historical lithium mine, which was active in the second world war, by a phone call from a retired member of the British Geological Survey and found it with the help of satellite images. He believes the mine helped supply lithium for submarine air conditioners, at a time when Germany was Europe’s biggest producer of the mineral.

Mr Wrathall wants to revive that legacy, helping the UK to develop a homegrown lithium industry to supply carmakers that are rapidly transitioning to producing electric vehicles that require the metal in their batteries.

Demand for lithium is set to surge over the next 10 years and he says production from Cornwall can be more environmentally friendly than Chile, Australia and China, helping to produce batteries with a lower carbon footprint and reducing reliance on overseas supplies.

New extraction technologies being looked at in California by Warren Buffett’s Berkshire Hathaway and backed by Bill Gates’ Breakthrough Energy Ventures fund could help unlock Cornwall’s lithium. It is found in hot brine which flows through the mineral-rich granite that underlies the whole region. The same brine can also be used to generate low-carbon geothermal energy. These technologies could help revive the Cornish mining industry, following the closure of the last tin mine in 1998 after four thousand years of extraction.

The question is whether Cornwall’s resources are big enough to sustain a competitive low-cost lithium industry on the scale needed to meet the UK’s expected demand for batteries. A rival company, British Lithium, is also digging for the battery metal and hopes to open a conventional open-pit mine in St Austell in 2023.

The government hopes lithium mining could benefit one of the UK’s most deprived regions, whose tourism and fishing industries have been hard hit by coronavirus. Cornwall’s fishermen also face an uncertain future after Brexit, depending on the outcome of any trade deal.

“The UK has to create a lithium-ion battery-based economy or it will fall behind,” says Simon Moores, managing director of consultancy Benchmark Minerals. “It’s not just one industry, it’s automotive, batteries, chemicals and raw materials. If possible the UK should get 25 per cent of its raw materials domestically in the next 10 years. It’s a good goal to invest in domestic UK sources and extraction technology.”

In February 2016, Mr Wrathall was walking to his job as a mining analyst at Investec in the City of London when he remembered a remark from a friend who had worked for the South Crofty tin mine in Cornwall, which had shut in 1998 with the loss of 200 jobs. He had said there was lithium in the hot salty fluid that flowed through the rock at the bottom of the mine.

It was a “dark and horrible rainy day”, he recalls. “And I thought, really is this what life is all about?”

Mr Wrathall had ridden the commodity boom and slump in the City, following a stint doing mountain rescue and running an outdoor clothing store in the Lake District, where he was born. He had made a name for himself by writing a note with colleagues that said Glencore’s equity was worthless in September 2015, causing the FTSE 100 share price to plunge by 30 per cent (it has since risen by 150 per cent).

Electric car sales were taking off and carmakers were starting to secure supplies of large lithium-ion batteries from Asia. Mr Wrathall quit his job and decided to form Cornish Lithium. “It was probably the most insane choice I’ve ever made,” he recalls. Last year he crowdfunded the company online, raising £1.4m. Last month, Cornish Lithium said the government’s £900m Getting Building Fund, designed to help the economy recover from coronavirus, would help fund a pilot plant to extract lithium from the geothermal waters at the United Downs well run by Geothermal Engineering.

Mr Wrathall hunted down archives of long closed Cornish mines, unearthing dusty maps in the basement of the British Geological Survey and from private collections held by local landed estates. He started to digitise the carefully drawn mining maps from the 19th-century mining boom, when there were over 4,000 mines in Cornwall. He now has the biggest digital archive of Cornish geology, with 45 terabytes of data.

“The whole history was completely forgotten about,” Mr Wrathall says. “Everyone gave up on Cornwall — all the men left, and the capital left. It’s re-evaluating an old mining area with modern eyes.”

He found that lithium in Cornwall had first been analysed by an academic at King’s College London, WA Miller, in 1864, who had noted the mineral contained in the hot springs at the bottom of the Wheal Clifford mine may have “great commercial value”.

All told, Mr Wrathall has found 76 mentions of lithium in the historical records. That has helped Cornish Lithium know where to drill. The company uses computer modelling software that creates a three-dimensional map of Cornwall’s riches using the old data.

“It’s really powerful being able to combine it into one place. Obviously, they could put two maps next to each other but they couldn’t spin them around and look at it in 3D and visualise it,” says Lucy Crane, a senior geologist for Cornish Lithium and graduate of the Camborne School of Mines in Cornwall. “I’ve been impressed by how accurate they were.”

Lithium extraction in Chile, which involves evaporating the brine in vast evaporation ponds, has been opposed by local indigenous groups who say it threatens the water supply and fragile ecosystem of the Atacama Desert, one of the world’s driest deserts. Lithium from Australia is also coming under increased scrutiny due to the fact it is processed in China using fossil fuels, such as coal and natural gas, in a process that involves roasting it at 800C.

That creates pressure for carmakers such as Volkswagen, which has pledged to reduce the environmental impact of its vehicle production by 45 per cent by 2025 compared with 2010. This year VW sent a “fact-finding” team to Chile to assess lithium production in the country.

“The raw materials for our electric batteries must be extracted under sustainable conditions,” says Ullrich Gereke, head of procurement strategy at VW. “We must therefore do everything possible to ensure that the extraction of lithium does not harm people or nature.”

New “direct-extraction technologies” could enable the production of lithium from brines with lower concentrations of lithium than Chile without the use of large evaporation ponds. Oakland-based Lilac Technologies, which received $20m in funding led by the Bill Gates-backed $1bn Breakthrough Energy Ventures in February, uses ion exchange beads placed in tanks that absorb the lithium, which is then flushed out with hydrochloric acid.

The technologies are being tried out in the Salton Sea in California, a man- made lake where a number of power stations already generate power from geothermal energy using hot brine that contains lithium. 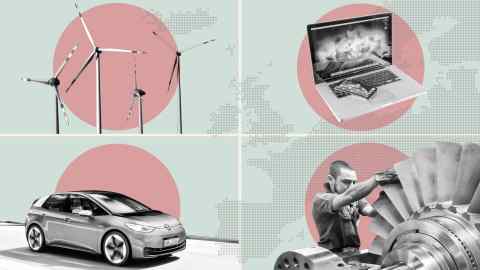 In Cornwall, the 5,275m deep United Downs geothermal well near Redruth is located only 600 metres from where lithium in Cornwall was first discovered in 1864. The energy and heat from the geothermal well could be used to power a lithium processing plant which extracts the metal from the hot fluid.

Still, Cornish Lithium will need to show that a large, low-cost resource exists in Cornwall’s granite to gain enough funding, says Alex Grant, a co-founder of Lilac Solutions who advises the sector. If it’s not a sizeable resource, the UK government may be better off putting money in other sectors of the electric car supply chain, he says.

“The UK needs to be honest about whether their lithium resources are globally relevant or not,” Mr Grant says. “Economy of scale will still win, and VW is not going to give you an offtake [of lithium] unless you have a consistent vetted product.”

The Faraday Institution, a government-backed body set up in 2017 to promote the battery industry, estimates UK demand for lithium could reach 59,000 tonnes a year of lithium carbonate equivalent by 2035, based on projected growth in domestic battery demand. That’s around a fifth of current global demand for lithium.

Cornish Lithium does not disclose how much it thinks it can produce but Mr Wrathall says it can produce a “meaningful amount” relative to the Faraday forecast demand. British Lithium says a preliminary economic evaluation for its quarry and refinery indicates it could produce around 20,800 tonnes a year of lithium carbonate equivalent.

Roderick Smith, the Australian chairman of British Lithium, says domestic lithium supply could help make the UK a more attractive place for battery makers to build factories — which is key to ensuring electric cars are made in the UK and not imported. The UK has yet to develop a Tesla-style “gigafactory” for producing car batteries, making the industry reliant on suppliers in Asia.

“I think the biggest risk to the UK economy is that the UK automotive industry fails to transition, and we become major importers of EVs,” Mr Smith says. “With the sale of internal combustion vehicles prohibited in UK and elsewhere in Europe from 2035, this industry will be lost if it doesn’t transition to electric vehicles.”

Mike King, managing director of Cornwall Development Company, an economic development agency, says a revived mining industry in Cornwall could provide up to 300 new jobs, and many more in the broader supply chain.

“Cornwall used to have the most expensive square foot of land in the whole world now it’s the poorest,” says Mr King, referring to Gwennap, a village near the mining hub of Redruth, in the 19th century. “But unlike coal mines there’s a genuine chance of regeneration. It’s the most heavily exploited but under-explored mineral province of Europe.”

But the industry will require the co-operation of the large landholders who own many of the mineral rights, including the Duchy of Cornwall owned by Prince Charles.

Mr Wrathall has already secured the rights to extract lithium from multiple landed estates. This includes the grand Tregothnan estate that dates back to the 14th century, which is owned by the Boscawen family, who made money from the copper and tin mining boom of Cornwall during the 19th century.

“It is a game-changer for Cornwall if it’s managed properly and it could be for the UK as well,” says Andrew Jarvis, the estate’s manager, as he walks around Tregothnan’s botanical gardens. Thanks to a microclimate that resembles Darjeeling in India, the UK’s only tea is grown on the estate.

But other landowners in Cornwall are more cautious. One landowner, whose family has owned his estate since the 13th century, says he is cautious about a rush of new mining ventures.

“There’s a disjoint in how it was in [television drama] Poldark and what it was actually like,” he says. “There’s a lot of love of mining but a realisation that this is a transitory thing. We want to avoid boom and bust — we want managed economic growth rather than a smash and grab.”

Is Gold’s Big Rally Over? Here Are Five Key Charts to Watch

Is Gold’s Big Rally Over? Here Are Five Key Charts to Watch

How the pandemic deepened the poverty pit

Donald Trump refuses to commit to peaceful transfer of power