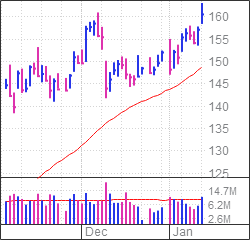 Qualcomm (QCOM) is the IBD Stock Of The Day as the wireless-chip maker benefits from expected smartphone sales growth this year. Qualcomm stock surged into a buy zone on Thursday.


In morning trading on the stock market today, Qualcomm stock broke out of a six-week flat base at a buy point of 161.17, according to IBD MarketSmith charts. The 5% buy zone extends up to 169.23.

By the close, however, Qualcomm stock slipped below that buy point and ended the trading session up 2.2% to 160.85. Investors could have started a position in Qualcomm stock in the past couple of weeks after it bounced off its 10-week moving average line, according to IBD analysis.

The San Diego, Calif.-based company has had an eventful 2021 so far.

On Jan. 5, the Qualcomm board of directors announced that Cristiano Amon will succeed Steve Mollenkopf as chief executive, effective June 30. Amon, who has worked at Qualcomm since 1995, is currently company president. Mollenkopf is retiring after 26 years at Qualcomm, including the last seven as CEO.

The next potential catalyst for Qualcomm stock is its fiscal first quarter earnings report on Feb. 3. Wall Street predicts Qualcomm earnings of $2.08 a share, up 110% year over year, in the December quarter. Analysts are looking for sales to rise 63% to $8.24 billion in the period.

KeyBanc Capital Markets analysts on Wednesday listed Qualcomm stock as one of their “key ideas” among semiconductor stocks for 2021. The investment bank expects Qualcomm to profit from smartphone sales returning to growth this year thanks to the rollout of 5G wireless handsets.

KeyBanc rates Qualcomm stock as overweight with a price target of 180.

Ranks Seventh In Its Industry Group

Qualcomm has an IBD Relative Strength Rating of 83. That means it has outperformed 83% of stocks over the past 12 months.

Also, Qualcomm stock has an IBD Accumulation/Distribution Rating of B-, which indicates slightly better-than-average institutional buying.

The Week in Business: Running for the Doors

evolvetogether: This female-founded face mask brand had a wait-list of more than 40,000 customers

The Week in Business: Running for the Doors

evolvetogether: This female-founded face mask brand had a wait-list of more than 40,000 customers

Peloton’s Rapid Rise Is Threatened by Its Slow Delivery

Give up stubborn stand and come for clause by clause discussion on Jan 19: Agri Minister to protesting farmer unions