Boris Johnson on Monday portrayed himself as the defender of Britain against the threat of “extreme and unreasonable” action by the EU, as he sought to quell a growing Conservative rebellion over his plans to break international law on Brexit.

But Mr Johnson’s deployment of Churchillian rhetoric did little to contain the anger sweeping through his party — including among some of its most senior figures — over his plan to override his own Brexit deal.

Mr Johnson, opening the first House of Commons debate on the bill, insisted it was a vital “safety net” to ensure the EU did not exploit ambiguity in his own Brexit deal to cut Northern Ireland adrift from the rest of the UK.

“What we cannot do now is tolerate a situation where our EU counterparts seriously believe they have the power to break up our country,” he said.

The bitter rhetoric has cast a shadow over talks on an EU-UK trade deal, with time running out to complete an agreement ahead of the end of the Brexit transition period on December 31.

Mr Johnson’s plans have been criticised by all five of Britain’s surviving prime ministers — David Cameron became the latest to attack the bill on Monday — with rebel Tory MPs and peers preparing for weeks of parliamentary warfare.

Faced with growing domestic and international condemnation, Mr Johnson doubled down on his claim that the bill was vital to head off “extraordinary” threats made by the EU in recent months.

He claimed the EU had raised the possibility of “blockading” food movements from mainland Britain to Northern Ireland by refusing so far to certify the UK’s food as being safe to export after the UK’s transition period ends.

Some Tory MPs claimed the “blockade” argument was belatedly invented by Number 10 to justify the internal market legislation; indeed Mr Johnson admitted his bill did not include any measures to counter the supposed threat.

This is his deal, his mess, his failure

The prime minister also claimed the EU was threatening to impose tariffs on all goods moving from Great Britain to Northern Ireland under an “extreme” interpretation of the terms of the Northern Ireland protocol, part of the legally binding EU withdrawal treaty which was agreed by Mr Johnson last year to avoid a hard border in Ireland.

“We cannot have a situation where the very boundaries of our country could be dictated by a foreign power or international organisation,” he said. Jeering opposition Labour MPs claimed Mr Johnson had not read his own treaty.

The internal market bill would give ministers the right to interpret parts of the treaty unilaterally, including banning export summary declarations for goods travelling from Northern Ireland to Great Britain and deciding on the application of EU state aid rules in the region.

Ed Miliband, Labour’s shadow business secretary, standing in for leader Keir Starmer who was forced to self isolate after a member of his family displayed coronavirus symptoms, accused Mr Johnson of “trashing” the country’s reputation.

“This is his deal, his mess, his failure,” he said. “For the first time in his life it’s time to take responsibility.” Mr Miliband said the debate was not a rerun of old Brexit arguments: “It’s an argument of right versus wrong.”

Earlier Rehman Chishti, a Tory MP and former barrister, resigned as Mr Johnson’s special envoy for freedom of religion, saying that “respecting the rule of law and honouring one’s word are dear to me”.

Mr Javid said he would not be supporting the government during the Commons vote on the bill on Monday evening. “Breaking international law is a step that should never be taken lightly,” he added.

Although Mr Johnson was expected to win the vote comfortably — he has a Commons majority of almost 80 — this was only the opening skirmish in what is threatening to be a bitter battle with MPs and the House of Lords, reviving memories of last year’s parliamentary struggles over Brexit.

Tory officials said they were braced for around 15 abstentions.

Some Tories said they would vote for the bill on Monday, but would also next week support a rebel amendment by senior Conservative Bob Neill, which would allow MPs to block the use of powers in the bill at a later stage. 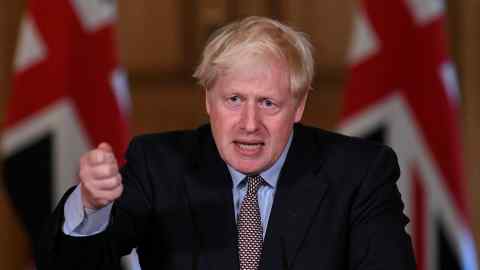 One Tory MP, normally supportive of the prime minister, said: “It’s a complete failure of statecraft to sign something and then — a few months later — try to rip it up. They don’t know what they are doing.”

The prime minister spent the afternoon talking to anxious Tory MPs, while Conservative officials did not rule out the possibility of taking away the party whip from rebels. “All options are on the table,” said one.

“They are telling people to remember what happened in 2019,” said one former minister, referring to Mr Johnson’s decision to purge pro-European Tories from the party over Brexit. “It will only stiffen people’s resolve.”

The EU has said it is waiting to hear Britain’s plan for food safety after the Brexit transition period before granting it “third country status” to approve exports.

Tory MPs opposed to Mr Johnson’s attempts to amend the Brexit withdrawal agreement argued that if the EU tried to enforce a food “blockade” in Northern Ireland, the treaty’s dispute mechanism could be used.

Some Conservative MPs said Mr Johnson only came up with his recent justification for the internal market bill when he was engulfed in a political row after the Financial Times revealed the legislation would override parts of the withdrawal treaty.

One Tory MP said: “After the FT broke the story, I had a call saying it was all very minor and technical and that the ‘Remoany’ FT was whipping it up. When we admitted we were breaking the law, that put it in a different light.”

Posthaste: Alberta’s oilpatch gets a rare gift — a U.S-backed $22-billion export line to tidewater via Alaska

Posthaste: Alberta’s oilpatch gets a rare gift — a U.S-backed $22-billion export line to tidewater via Alaska

Something investors should remember if they fear a contested election: Morning Brief

5 takeaways from the NYT report on Trump's tax returns