We estimate that the aggregate demand for American natural gas (consumption + exports) totaled around 871 bcf for the week ending February 14 (up 3.3% w-o-w (week over week) and up 2.9% y-o-y (year over year)). The deviation from the norm remained positive and actually increased from +12.50% to +17.40%. We estimate that total demand has been above the five-year norm for 57 consecutive weeks now.

This week, the weather conditions have cooled down significantly across the Lower-48 states. We estimate that the number of nationwide heating degree-days (HDDs) jumped by 15.2% w-o-w (from 157 to 180). However, total energy demand (measured in total degree-days – TDDs) should still be some 3.7% below last year’s level, but mostly within the 30-year norm.

However, there is a disagreement between the models in terms of scale. According to ECMWF-ENS (00z) model, natural gas consumption should average around 104.9 bcf/d over the next 15 days, but GFS-ENS (06z) model is forecasting 109.8 bcf/d over the same period.

The extended-range ECMWF model is still projecting above normal TDDs for most of March but consumption-wise, the latest model was mostly neutral (vs. previous update). 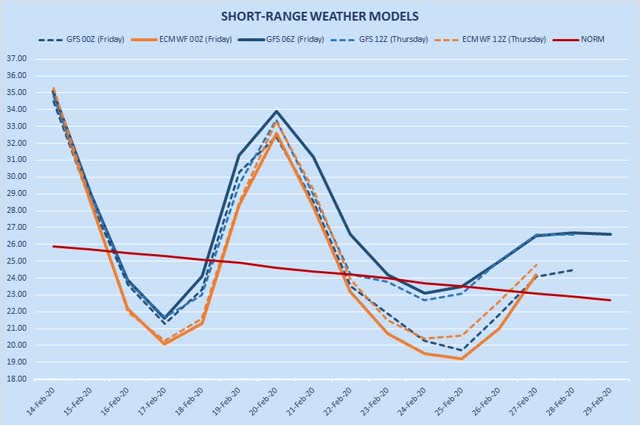 Overall, we estimate that next week (ending February 21), total demand will edge up by 1.1% w-o-w and will rise by 2.8% in annual terms (see the chart below). The deviation from the norm should remain relatively unchanged. 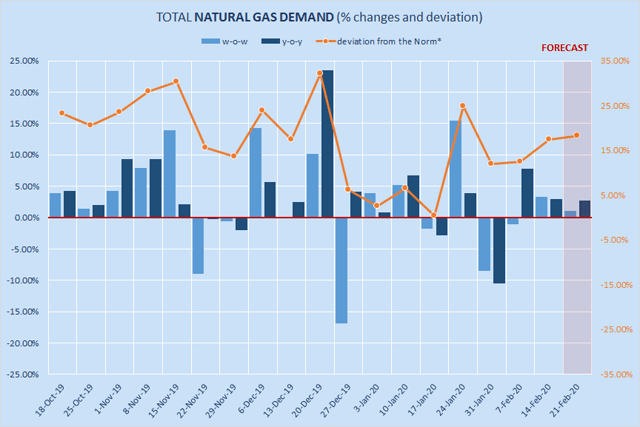 Non-degree-day factors are slightly bullish (vs. last year). The most important five non-degree-day factors that we are looking at are: nuclear outages, the spread between natural gas and coal (coal-to-gas switching), wind speeds, solar radiation and hydro inflows. In the week ending February 14: 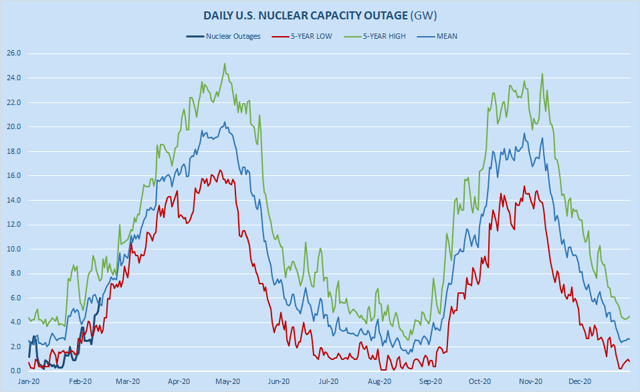 Overall, the net cumulative effect from the non-degree-day factors this week should be positive at around +3.1 bcf/d of potential natural gas consumption in the Electric Power sector, which is 0.2 bcf/d above last year’s results. 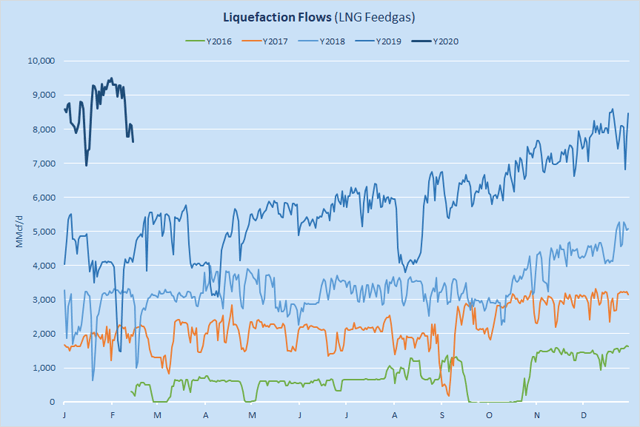 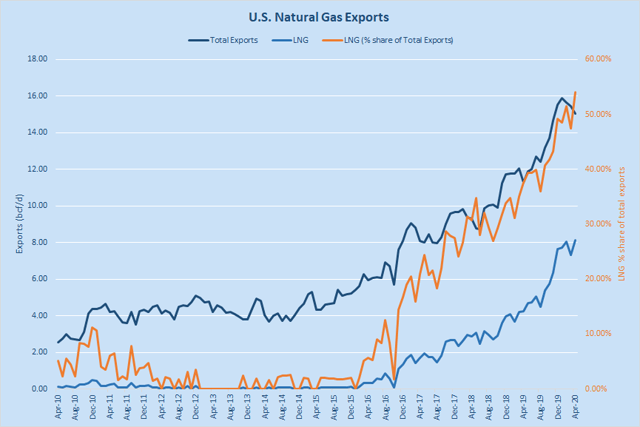 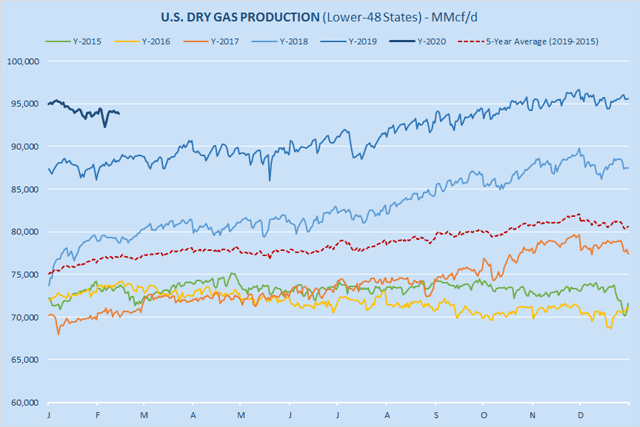 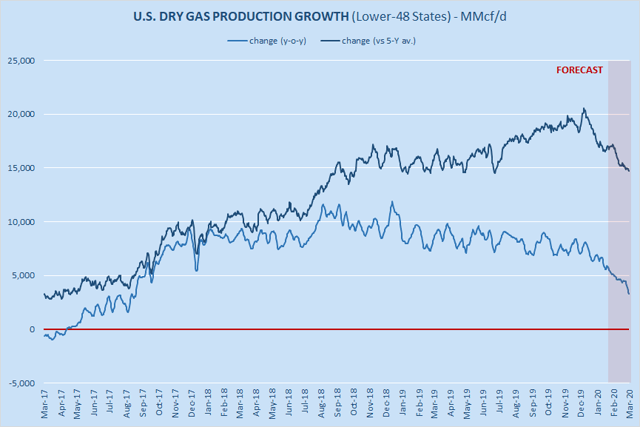 Overall, total “non-adjusted” supply-demand balance (as per EIA methodology) for the week ending February 14 should be negative at around -21.00 bcf/d, which is approximately +2.40 bcf/d looser compared to the same week in 2019 (see the chart below). Next week (ending February 21), the balance is projected to tighten up, but only slightly to +1.59 bcf/d (vs. the same week in 2019). However, the deviation from the norm should stay in the “bullish territory” – i.e., below zero (see the chart below). 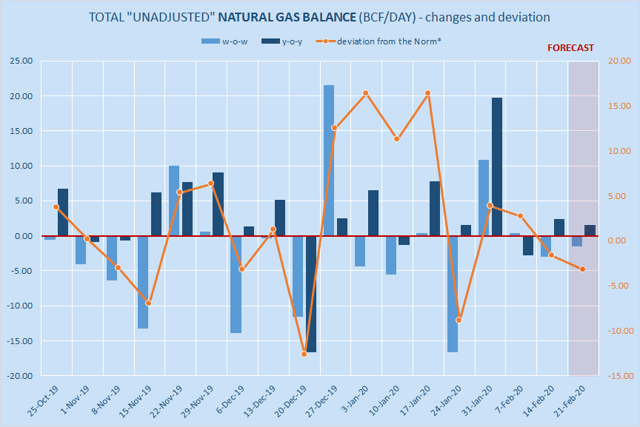 Currently, we expect the EIA to report a draw of 140 bcf next week (final estimate will be released on Wednesday). Overall, at this point in time, we expect storage flows to average -130 bcf over the next three weeks (four EIA reports). Natural gas storage “surplus” relative to the five-year average is currently projected to shrink by -58 bcf over the next three weeks from +215 bcf today to +157 bcf for the week ending March 6.

Thank you for reading this article. We also write daily and weekly reports, covering key variables in U.S. natural gas market (supply, demand, storage, prices and more). We provide the following to subscribers:

We are offering a two-week free trial, and we will soon begin to cover global LNG market. Come and join us.

Disclosure: I/we have no positions in any stocks mentioned, and no plans to initiate any positions within the next 72 hours. I wrote this article myself, and it expresses my own opinions. I am not receiving compensation for it (other than from Seeking Alpha). I have no business relationship with any company whose stock is mentioned in this article.

How are blockchain and algorithms affecting the world of finance

No room for bias in algorithms

NBCUniversal Peacock unveiling: What to expect

Charles Schwab says broker’s move to zero commissions was an ultimate goal for the...

LONDON (Reuters) - Global shares rose on Monday as the promise of further policy stimulus to counteract the economic hit from a coronavirus...

Mural in Tampa, Fla.Courtesy of Visit Tampa.Miami and Orlando may be the tourist destinations that come to mind when travelers think of Florida,...