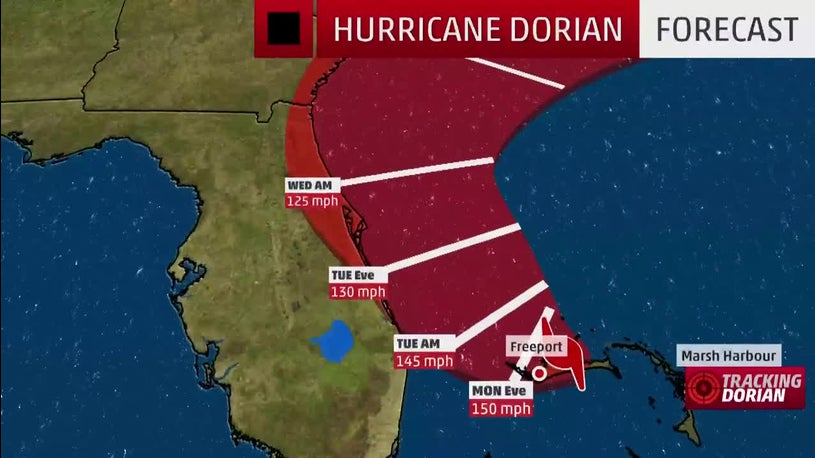 Hurricane Dorian is creating chaos with all types of travel.

Reports say Grand Bahama International Airport in Freeport was under 5 feet of water Monday. A Florida lawmaker, Rep. Kion McGhee, shared a video of waves slapping against windows at the airport on the island of Grand Bahama. McGhee said the video was sent to him by a member of the Bahamian parliament, Iram Lewis. Communication has been cut off with much of the island since the storm hit Sunday.

About 130 miles to the southeast, on New Providence Island, Lynden Pindling International Airport in Nassau confirmed it was open Monday, but 36 flights have been canceled.

(MORE: What’s Next for Hurricane Dorian?)

Orlando International remained open Monday despite those flight cancellations. Previously the airport had announced it would close at 2 a.m. Monday but rescinded that announcement after Dorian’s forecast path changed.

Daytona Beach International Airport planned to close its terminal at 6 p.m. Monday. Customers with scheduled flights were told to check with their air carrier directly.

Jacksonville International Airport remains open but advised travelers to contact the airline they are flying.

Miami International Airport did not announce any closures.

Interstate travel, which would have already been busy with Labor Day travelers, got much tougher as hundreds of thousands of coastal residents were told to evacuate.

In South Carolina, Gov. Henry McMaster ordered more than 800,000 residents to leave their homes. Eastbound traffic was allowed to drive on Interstate 26’s westbound lanes from Charleston to Columbia beginning at noon Monday.

In Georgia, where Gov. Brian Kemp announced the mandatory evacuation of coastal areas east of Interstate 95, lanes were reversed on Interstate 16 from Savannah to U.S. 441 in Dublin.

It was unclear whether or not some ships would be able to return to or leave ports in Florida and South Carolina.

Some ships will stay at sea an extra day or two and wait for ports to reopen. The website recommended signing up for text alerts from the cruise line.

The closing of Port Miami and Port Everglades in Fort Lauderdale also affected cruises. For example, the Norwegian Breakaway is not be able to return to Miami and will instead dock in New Orleans on Tuesday, according to Cruzely. The Carnival Horizon had to leave Port Miami when it closed and may not be able to take on passengers for the next cruise until Wednesday.

Explainer: How U.S. markets will function if coronavirus breaks out in NYC

Traders who bought Virgin Galactic move on to ‘plague stocks’

World Health Organization officials said Friday they are increasing the risk assessment of the coronavirus, which has spread to at least 49 countries...

Hospitals across the world are ‘just not ready’ for coronavirus, WHO official warns

Medical staff from the IHU (Institut Hospitalo-Universitaire) Mediterranee Infection Institute are at work in the laboratory to analyse samples on the possible presence...

Explainer: How U.S. markets will function if coronavirus breaks out in NYC

NEW YORK (Reuters) - If an outbreak of coronavirus hits New York, it could cause more sharp selling of stocks, but markets would...