Apple Inc. (NASDAQ: AAPL) re-entered the $1-trillion club Oct. 4 thanks to a record run in the wake of improving fundamentals and alleviation of U.S.-China trade concerns.

Apple stock hit the $1 trillion market cap mark for the first time in August 2018 before iPhone woes dragged it below that level in early November 2018. Its valuation remained below the $1-trillion mark until Sept. 11, 2019.

With the iPhone 11 models introduced in late September generating some excitement, the stock re-entered $1-trillion territory, only to move in and out of the level.

Since Oct. 4, Apple stock has been consistently closing with a market capitalization of over $1 trillion.

On Friday, Apple closed at a record high of $236.86, having hit an intra-day high of $238.13 amid a slew of positive sell-side comments and the partial trade deal struck between the U.S. and China.

Monday’s session is significant, as Apple appears on track to overtake software giant Microsoft Corporation (NASDAQ: MSFT) as the most valued U.S. company after a six-month hiatus. 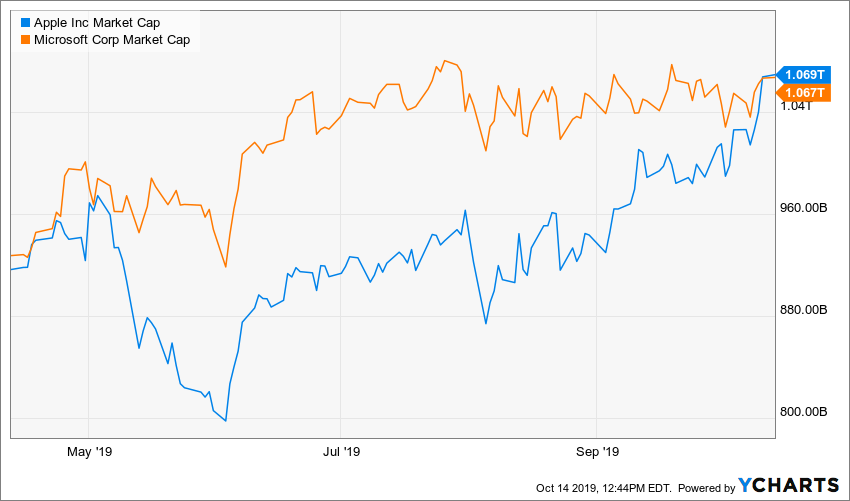 Microsoft and Apple are the only companies with market caps exceeding $1 trillion.

Amazon.com, Inc. (NASDAQ: AMZN) is a distant third, with a market cap around $855 million.

Analysts are projecting strong performance for the September quarter.

Canaccord Genuity analyst Michael Walkley said he expects Apple’s quarterly results to come in at the high end of its guidance. Most analysts have nudged up their iPhone volume estimates for the September quarter, as well for 2019 and 2020 as a whole.

Apple is also likely to double its Services business revenues from 2016 to 2020, Walkley said, crediting his expectations to the planned launch of Apple News+, Apple TV+, Apple Card and other services.

Given the strong product momentum and the modicum of improvement seen in macro fundamentals, Apple’s market cap could stay above the $1 trillion mark barring any unexpected negative developments.

© 2019 Benzinga.com. Benzinga does not provide investment advice. All rights reserved.

Biotech may be immune to market weakness, technician says

It’s ‘not a normal market’

Peloton initiated at outperform with $38 price target at Macquarie

This is a Real-time headline. These are breaking news, delivered the minute it happens, delivered ticker-tape style. Visit www.marketwatch.com or the quote page...

Traders who bought Virgin Galactic move on to ‘plague stocks’

World Health Organization officials said Friday they are increasing the risk assessment of the coronavirus, which has spread to at least 49 countries...

Hospitals across the world are ‘just not ready’ for coronavirus, WHO official warns

Medical staff from the IHU (Institut Hospitalo-Universitaire) Mediterranee Infection Institute are at work in the laboratory to analyse samples on the possible presence...