Even with a roughly 30% rise in the U.S. stock market, investors poured a record amount of new cash into taxable-bond funds in 2019, and U.S. stock funds saw net outflows. 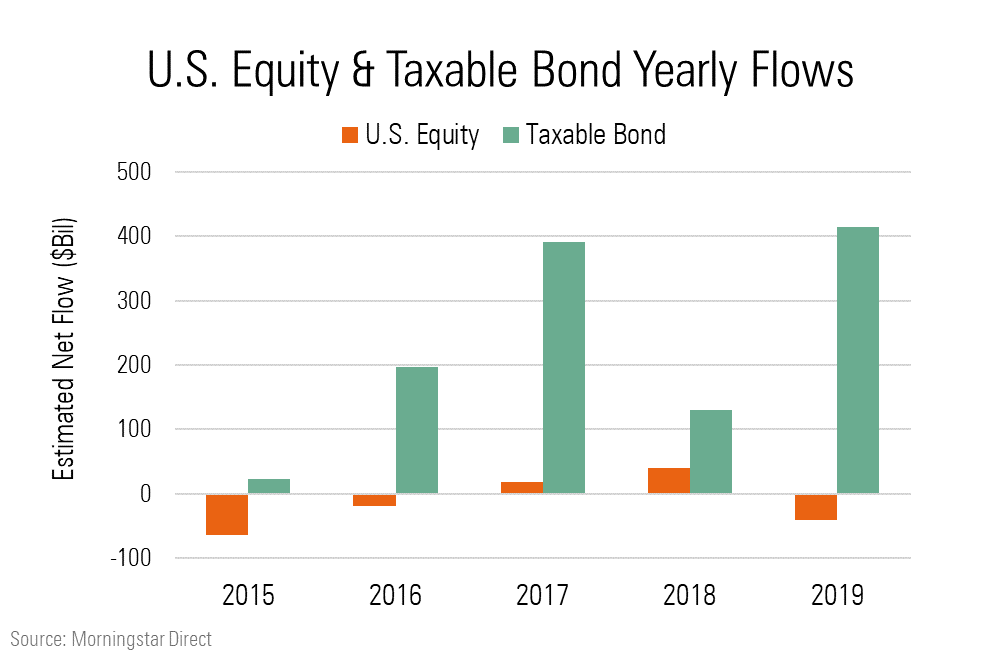 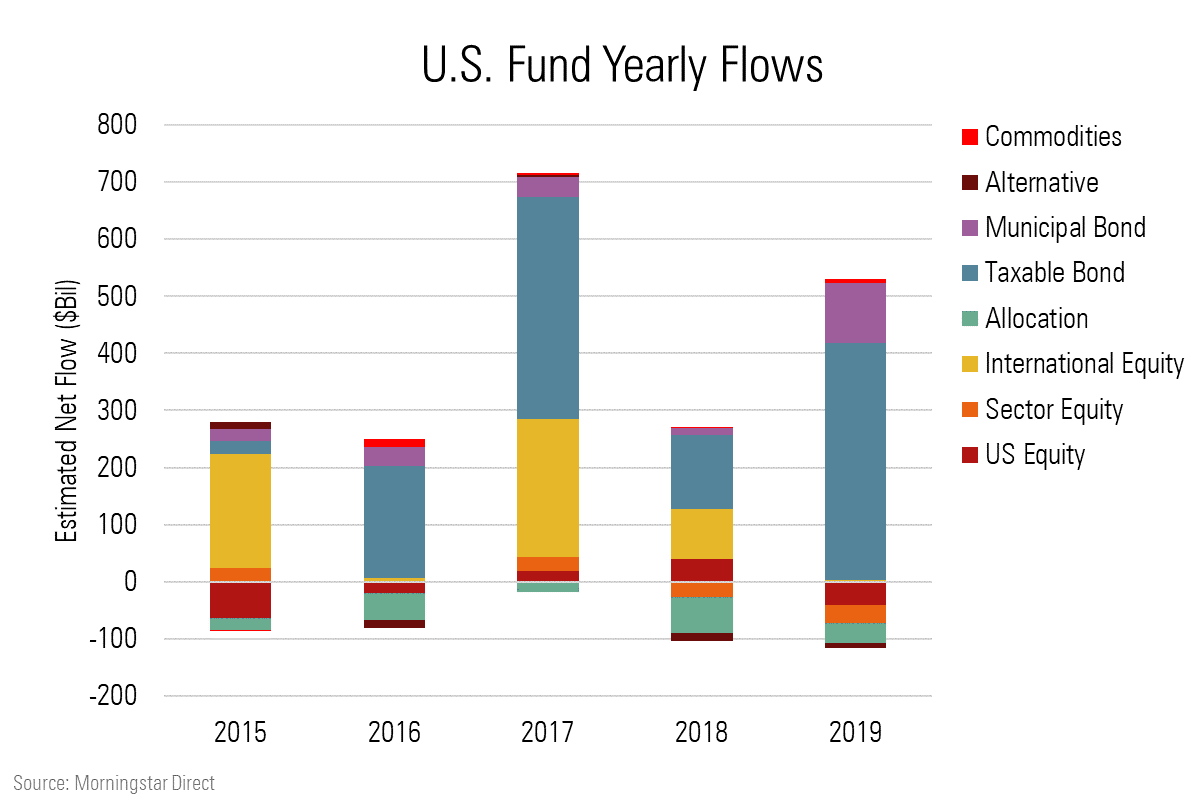 Among all long-term fund groups, the municipal and taxable-bond Morningstar Categories paced the inflows. Muni-bond funds saw record net inflows totaling $105.4 billion. International equity funds, which had large inflows in the past two years, took in only a net $3.8 billion. 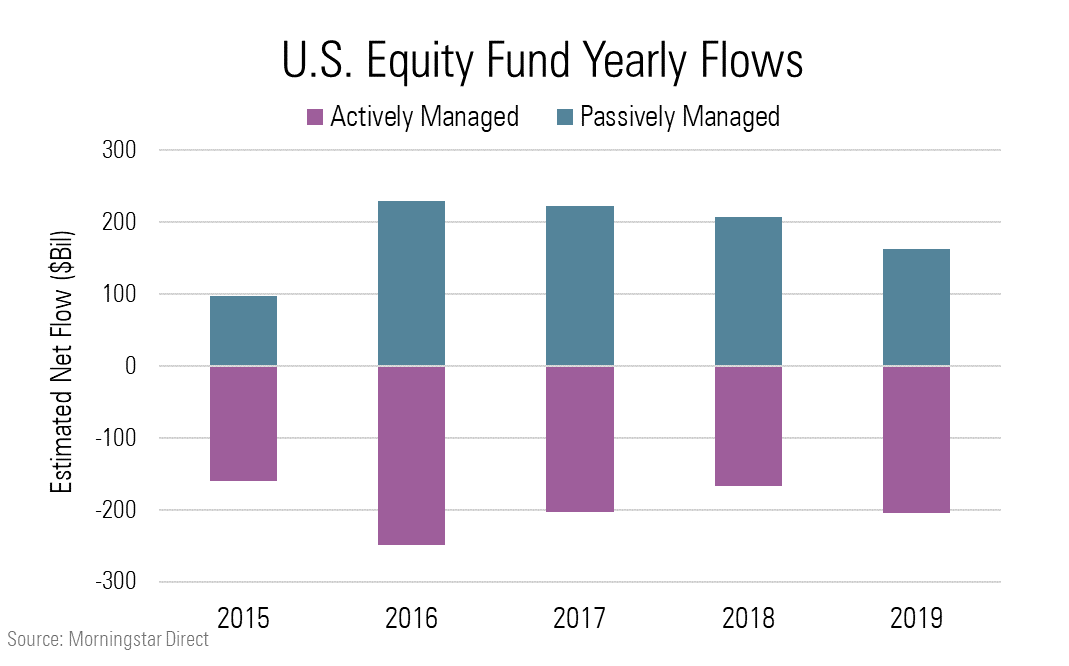 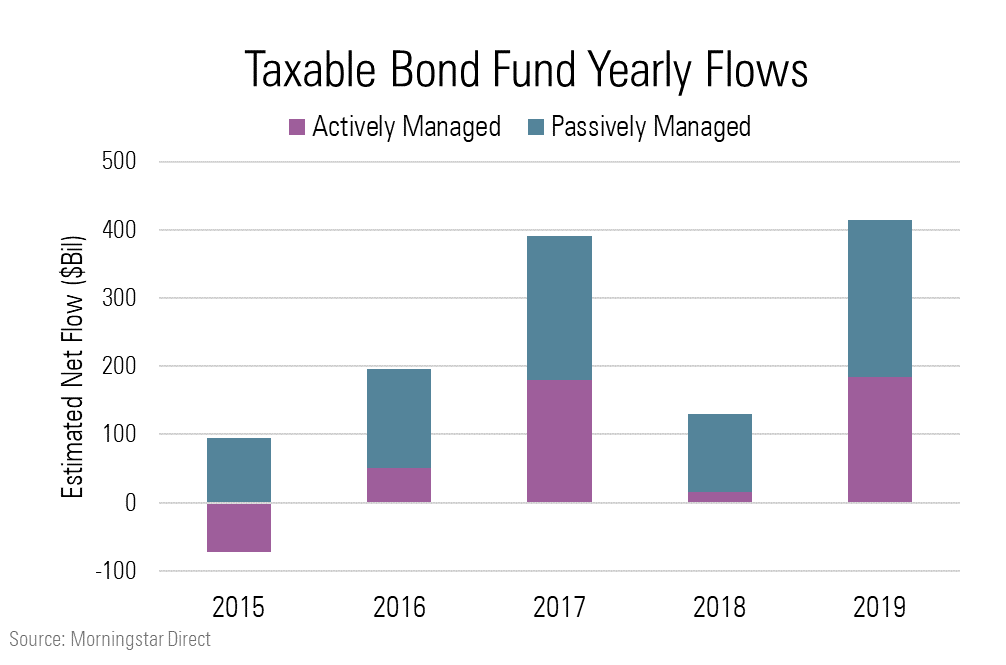 Among fund companies, the story in 2019 continued to be good news for index providers and bad news for fund companies with lineups dominated by active funds. Vanguard saw inflows of $183.3 billion, compared with $221.3 billion in 2018. Fidelity ranked third on the list; the company still saw $20.8 billion leave its active funds, but more than $91.3 billion went into its passive products. 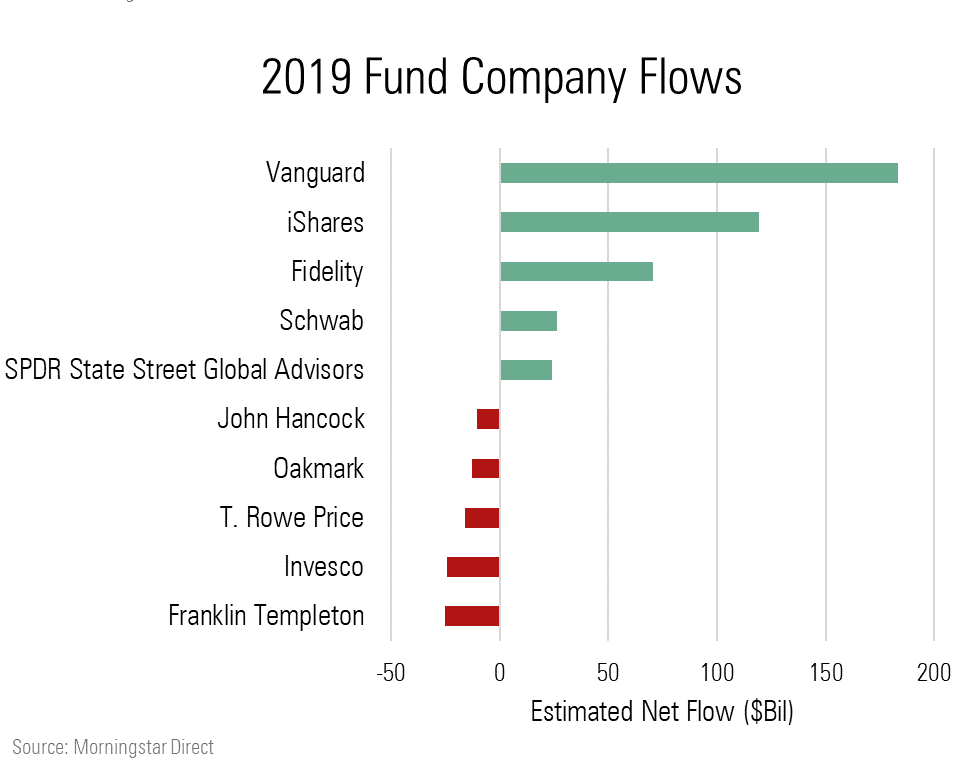 But as we have written elsewhere, the story isn’t one of active versus passive. It’s one of investors heading toward the cheapest funds. 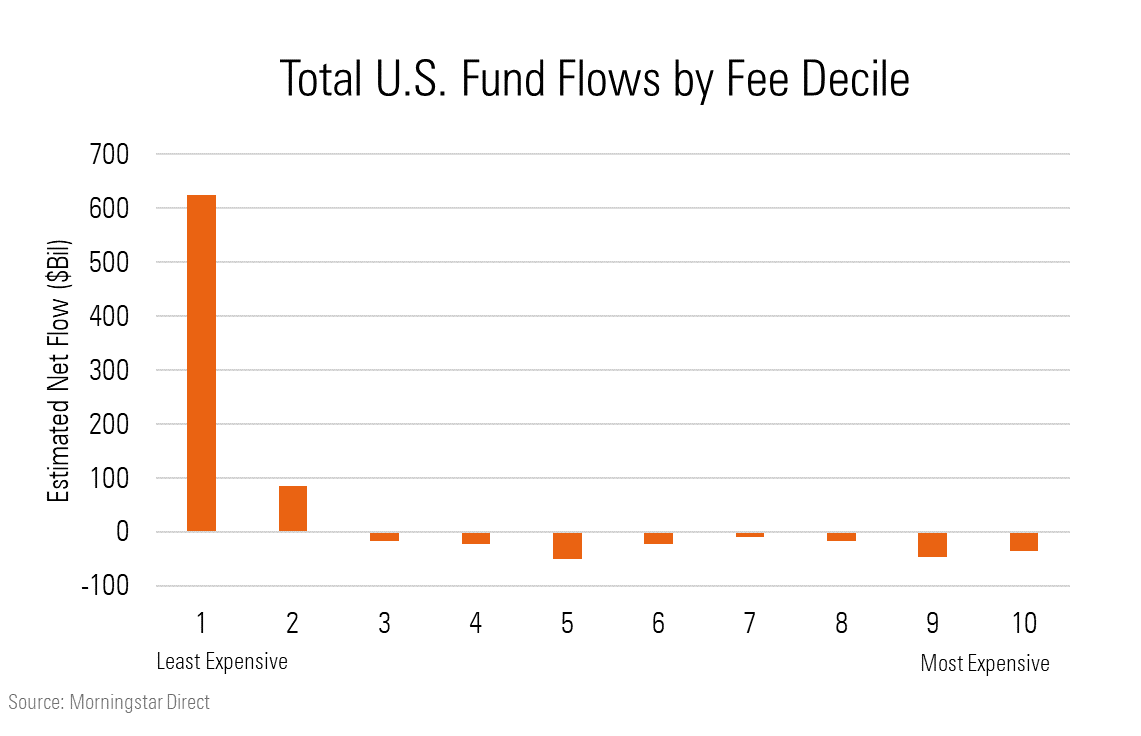 Meanwhile, money market funds had the largest inflows since the global financial crisis year of 2008. 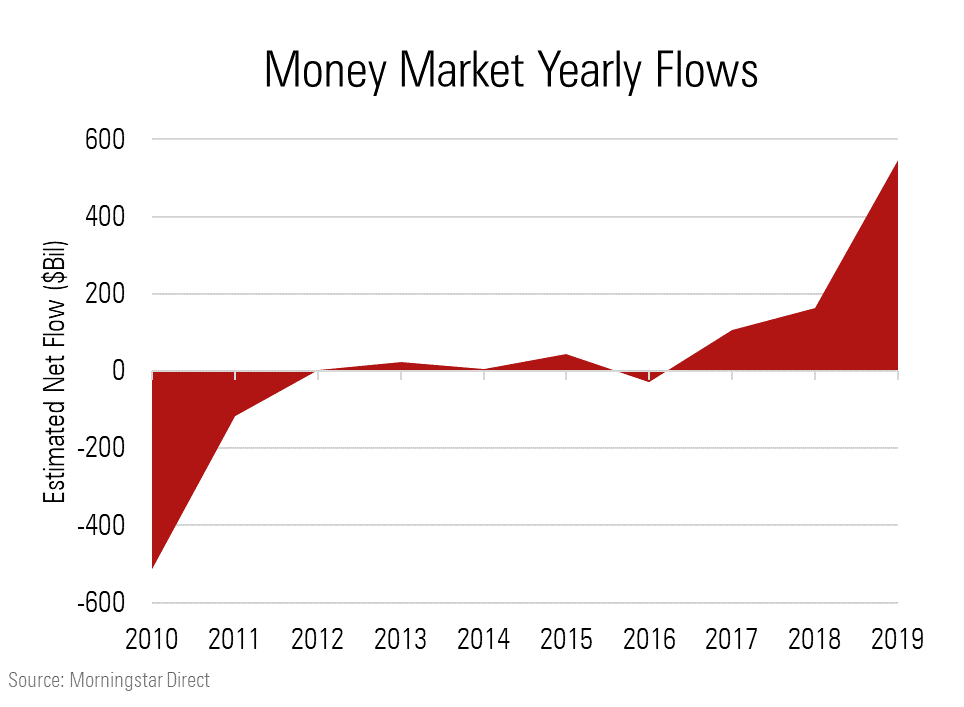 The group saw $547.4 billion of inflows, which topped the $414.6 billion that went into all long-term funds. While some market observers saw this flood of cash as “dry powder” that could drive stocks still higher, John Rekenthaler noted that money market funds’ share of total fund assets has actually been going down in recent years.

Among the other major trends in the U.S. fund industry has been the rising interest in sustainable investing. Every year since 2016 money has flowed into sustainable funds, but this year saw the largest jump on record. 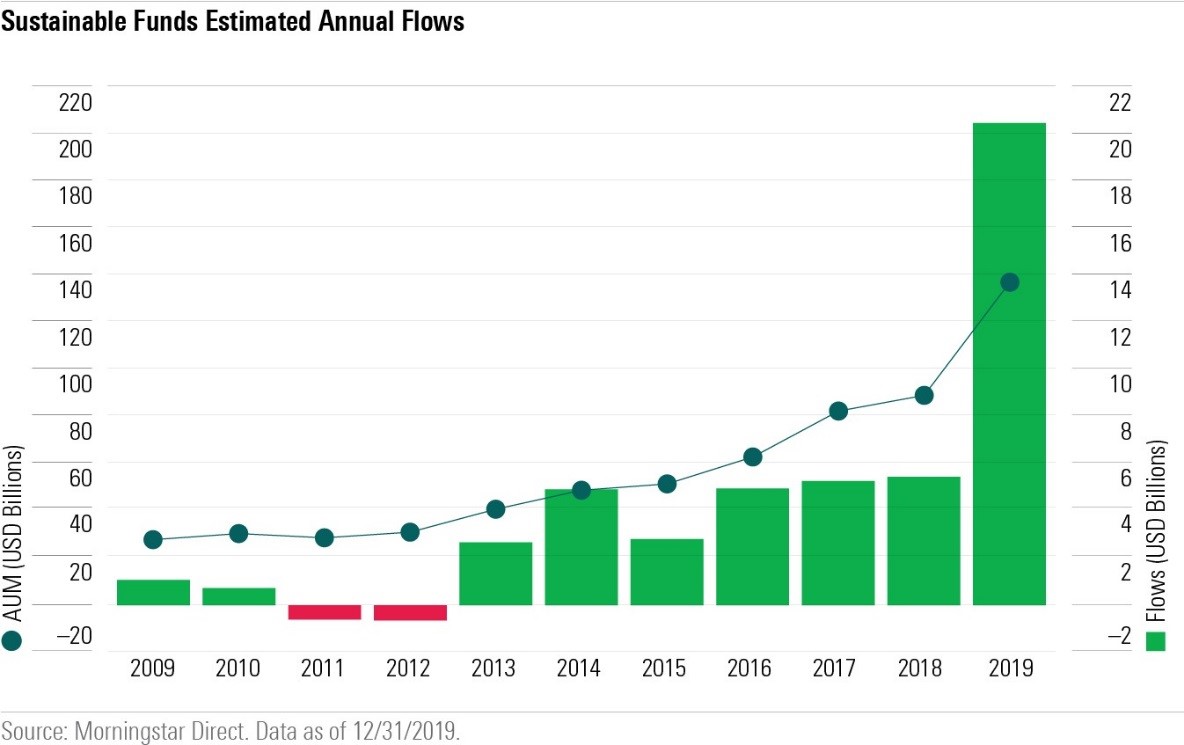 As Jon Hale, head of sustainability investing at Morningstar, noted, the estimated net flows into open-end and exchange-traded sustainable funds available to U.S. investors totaled a record $20.6 billion for the year. That’s nearly 4 times the previous annual record for net flows set in 2018.

Biotech may be immune to market weakness, technician says

US says hedge funds, private equity are not eligible

US 2020 Presidential election – a roadmap to election day – ANZ

GOP donor Paul Singer’s firm has seat on Twitter board, but can’t speak about...

Powerful GOP donor Paul Singer is founder and co-CEO of a hedge fund with a seat on Twitter's board.But that doesn't mean Singer...

The New York Stock Exchange (NYSE) is seen in the financial district of lower Manhattan during the outbreak of the coronavirus disease (COVID-19)...

The great rotation continues, with some of the most down-trodden names leading the market higher: industrials, airlines, financial institutions, and energy companies.Powerful monetary and...